Prossimamente in Messeplatz per ArtBasel 2018 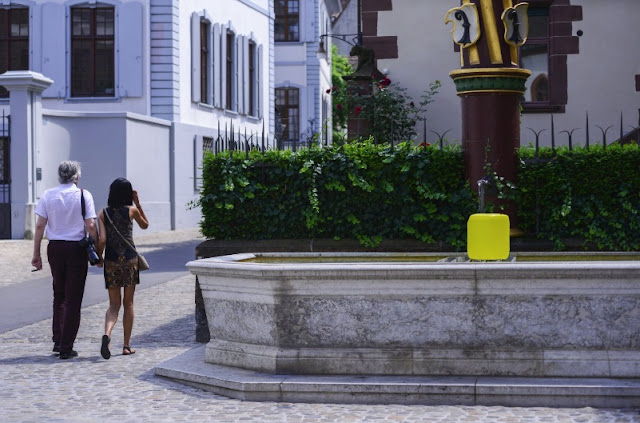 Lara Almarcegui, Isabel Lewis and Recetas Urbanas to collaborate on a public project for Basel's Messeplatz, presented by Creative Time and commissioned by Art Basel Conceived by artists Lara Almarcegui, Isabel Lewis and Santiago Cirugeda-led architecture studio Recetas Urbanas, ‘Basilea’ encourages reflection on a city’s possibilities through a series of immersive projects connecting the city of Basel, its residents, and the over 90,000 visitors who attend Art Basel annually. A Creative Time project commissioned by Art Basel, ‘Basilea’ will open to the public on May 23, 2018, culminating the week of Art Basel. The project marks Creative Time’s first international public commission and the first collaboration between the artists. Art Basel, whose Lead Partner is UBS, will take place at Messe Basel from June 14 to June 17, 2018.

‘Basilea’ is Elvira Dyangani Ose’s first project as Senior Curator at Creative Time. The project aims to create awareness of the capacity we, as citizens, have to alter and reappropriate an urban environment, at both individual and collective levels. It will encourage discussions about the self-governance and the use and ownership of public space. The project includes a collectively built structure, a large-scale installation, a series of workshops, events and hosted occasions.

In the three weeks preceding Art Basel, Recetas Urbanas, led by architect Santiago Cirugeda, will work with local and international volunteers to design and build a multipurpose civic structure, from locally sourced and second-hand materials. Participants will be invited to learn from and teach each other in a collective exchange and collaborative experience. During its construction and upon completion, the civic structure will be open to the public and activated by programs and performances. Following the closing of the 2018 edition of Art Basel, the structure will be relocated and given to one of the local organizations that participated in its construction, extending the significance and utility of the project long after the show concludes.

During the week of the fair, Lara Almarcegui will orchestrate a large-scale installation of gravel deposits from an active quarry that will surround the civic structure. Growing daily in increments equivalent to the gravel extracted from a Basel quarry each day, the workserves as an invitation to reflect on the consequences of our extractive relationship to the land. In conjunction, Almarcegui will create a map of Basel’s abandoned quarries, connecting these wastelands now awaiting a new function.

Isabel Lewis has conceived a series of workshops and occasions engaging the public through new modes of participation, inviting us to rethink notions of self and community. The work facilitates spaces for experimentation and play, where members of the public determine their own trajectories and level of engagement. The public workshops will take place on the Messeplatz in tandem with Recetas Urbanas’ building process, and continue through the week of the fair. What evolves from these workshops will form the foundation of a large-scale public choreography that highlights centuries-old, living traditions specific to Basel and generate encounters between historical practices and contemporary forms of bodily engagement.

‘Basilea’ is a Creative Time project commissioned by Art Basel and will be on display on Messeplatz from May 23 to June 17, 2018.

About Lara Almarcegui
A champion of neglected and forgotten sites, Lara Almarcegui’s work carefully catalogues and highlights a particular location's tendency towards entropy. Working at a time of widespread urban renewal in Europe, Almarcegui reflects upon the continent’s builthistories and extractive relationship with the land, and has even worked towards these sites’ legal protection. As Spain’s representative to the 55th Venice Biennial, she filled the interior of the pavilion with massive piles of building rubble similar to those used during its construction. Almarcegui has exhibited internationally, including at the Barbican Centre, London (2009); Haus der Kulturen der Welt, Berlin (2015); Athens Biennale (2009); Gwangju Biennale (2008); Sharjah Biennial (2007); São Paulo Biennial (2006); Seville Biennial (2006); Liverpool Biennial (2004); La Biennale de Lyon (2017); Manifesta IX, Genk (2012); and TRACK, Gent (2012). Almarcegui lives and works in Rotterdam, Netherlands and is represented by mor charpentier in Paris, Ellen de Bruijne Projects in Amsterdam and Parra & Romero in Madrid and Ibiza.

About Recetas Urbanas
Recetas Urbanas (Urban Recipes) is a design and advocacy collective of architects, lawyers and social workers founded by architect Santiago Cirugeda. The collective, known for self-built projects, relies on local participation to complete mobile structures made of locally sourced, second and third-hand materials. Activating different areas of urban reality, their projects are at the same time highly functional, legally provocative, and exploit the legalities surrounding the occupation of public space. Since its founding in 2003, Recetas Urbanas has worked with over 2,500 individuals internationally, of different social backgrounds, abilities and ages. The collective has undertaken projects around the world at cultural spaces including the Museum of Contemporary Art, Castellon de la Plana, Spain (2005); the Venice International Architecture Biennale (2016); Göteborg  International Biennial for Contemporary Art; and La Carpa, Seville (2010 – 2014).
Recetas Urbanas is based in Seville, Spain.

About Creative Time
Creative Time, the New York-based public arts non-profit, is committed to working with artists on the dialogues, debates and dreams of our time. Creative Time presents the most innovative art in the public realm, providing new platforms to amplify artists’ voices, including the Creative Time Summit, an international conference convening at the intersection of art and social justice. Since 1974, Creative Time has produced over 350 groundbreaking public art projects that ignite the imagination, explore ideas that shape society and engage millions of people around the globe. Since its inception, the non-profit organization has been at the forefront of socially engaged public art, seeking to convert the power of artists’ ideas into worksthat inspire and challenge the public. Creative Time projects stimulate dialogue on timely issues, and initiate a dynamic experience between artists, sites, and audiences.

About Art Basel
Founded in 1970 by gallerists from Basel, Art Basel today stages the world's premier art shows for Modern and contemporary art, sited in Basel, Miami Beach and Hong Kong. Defined by its host city and region, each show is unique, which is reflected in its participating galleries, artworks presented, and the content of parallel programming produced in collaboration with local institutions for each edition. Art Basel’s engagement has expanded beyond art fairs through a number of new initiatives. In 2014, Art Basel launched its Crowdfunding Initiative which catalyzed muchneeded support for outstanding non-commercial art projects worldwide and helped garner pledges in excess of USD 2 million in support of around 70 art projects from around the globe – from Bogota to Ho Chi Minh City, San José and Kabul. For Art Basel Cities, launched in 2016, Art Basel is working with selected partner cities to develop vibrant and content-driven programs specific to the individual city. Connecting them to the global art world through Art Basel's expertise and network, Art Basel Cities supports its partners to develop their unique cultural landscape. For further information, please visit artbasel.com.

Partners
UBS, Global Lead Partner of Art Basel, has supported the organization for more than 20 years. As Art Basel’s global network expanded, UBS has increased its lead partnership to include all three shows, and new initiatives as the Global Lead Partner of Art Basel Cities. UBS has a long and substantial record of engagement in contemporary art: as a holder of one of the world’s most distinguished corporate art collections, as an active partner in global contemporary art projects such as the Guggenheim UBS MAP Global Art Initiative, and as a source of information and insights through the UBS Arts Forum and the art news-focused app 'Planet Art' app. In March 2018, UBS and Art Basel co-published the second Art Basel and UBS Global Art Market Report by Clare McAndrew. Find more details at ubs.com/art.

Art Basel's Associate Partners, supporting all three shows, are MGM Resorts International – one of the world’s leading entertainment companies with a long-standing commitment to presenting and supporting art in public spaces; Audemars Piguet, whose expanding activities in contemporary art include the Audemars Piguet Art Commission; and NetJets – the world leader in private aviation.

Art Basel is also supported globally by BMW, who has co-developed with Art Basel the BMW Art Journey, Ruinart, the Official Champagne Partner and La Prairie, the premier luxury skincare.

The Art Basel show in Basel has a partnership with Baloise Group, whose Art Prize is awarded to up to two artists exhibiting in the Statements sector and AXA ART, the leading art insurance. Joining Art Basel for the first time as a partner is Sanlorenzo, the renowned Italian manufacturer of made to measure yachts. Further Partners of the Basel show are Davidoff, Vienna Tourist Board and ARVI. Art Basel's Media Partner is The Financial Times. For further information about partnerships, please visit artbasel.com/partners.