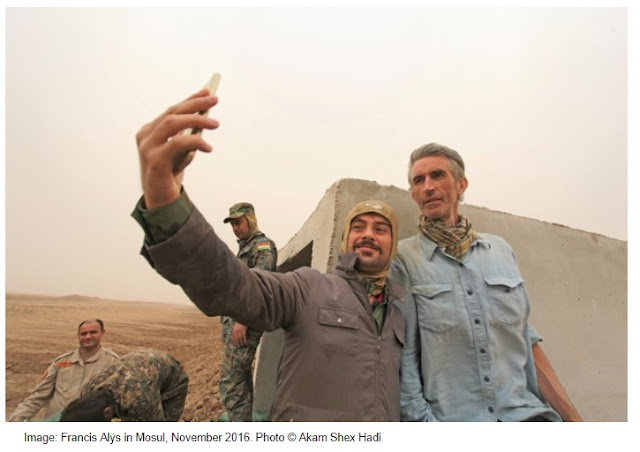 The EYE Art & Film Prize was awarded on 5 April to visual artist Francis Alÿs. The annual prize was launched in 2015 by EYE and the Paddy & Joan Leigh Fermor Arts Fund to promote new work by an artist/filmmaker who makes a significant contribution to the interdisciplinary field of film and visual art.


Born in Belgium in 1959, Francis Alÿs trained as an architect and relocated to Mexico City in 1986. During his many walks he started to record daily life in the city, never impartial in his artistic work. In 2016 he spent nine days embedded with Kurdish Peshmerga troops outside Mosul. He recorded that journey in the video work Untitled, Mosul, Iraq, 31 Oct 2016, which he presented last year at the Iraqi Pavilion at the Venice Biennale.

In his short film Paradox of Praxis: Sometimes Making Something Leads to Nothing from 1997, the artist pushed a large block of ice through the busy streets of Mexico City for nine hours until it had completely melted. In Peru, some 500 volunteers helped him to move a dune, one shovelful at a time, as captured in When Faith Moves Mountains (2002). This dedicated Sisyphus labour is a recurring image in his work and a reason why he is often dubbed the ‘architect of the absurd’.

Since 2004 Alÿs has focused on border locations to explore the role of the artist in highly charged social and political settings. What can the artist say that hasn’t already been said by the media? Alÿs has filmed in such places as the frontier town of Ciudad Juárez, considered the most lawless place in Mexico, in the Strait of Gibraltar, and in the waters between Cuba and Florida. In Jerusalem he left behind a trail of green paint along the so-called Green Line, considered the border after the 1948 ceasefire. Alÿs has also made videos about children’s games played all over the world. In Reel-Unreel (2011), Afghan children tap two film reels forward with their hands through the landscape: the front reel uncoils a film, and the second rolls it up again.

Almost all projects by Alÿs begin with a performance, often a walk through the city, from which various works then emerge – from hand-drawn animation loops and videos to sculptures, paintings and drawings. His work is both playful and serious, and always rooted in the real world.

Sandra den Hamer, director of EYE Filmmuseum and chairperson of the EYE Art & Film Prize, said the following on behalf of the jury:

“Conceptual artist Francis Alÿs draws on a strongly poetic and imaginative sensitivity in observing and probing political and social realities, such as those encountered along national borders and in conflict regions. The jury was highly impressed by his sincere and sensitive work that displays his personal and sometimes playful exploration of cities and urban areas. A major artist of his generation, Alÿs has amassed a complex and varied body of work that comprises videos, paintings, performances, drawings and photographs.”

EYE Filmmuseum and the Paddy & Joan Leigh Fermor Arts Fund launched in 2015 an annual prize to promote new work by an artist/filmmaker who is making a significant contribution to the interdisciplinary field of film and visual art. The award comes with a GBP 25,000 cash prize. Past winners are Hito Steyerl (2015), Ben Rivers (2016) and Wang Bing (2017). These three artists/filmmakers are the subject of an exhibition on show at EYE from 24 March to 27 May 2018.

EYE Filmmuseum, the national museum for film and the moving image, explores the intersection of art and film throughout history and in the present through a wide-ranging programme of exhibitions, film screenings, events, lectures and symposiums. Among the many artists/filmmakers who have been the subject of a special exhibitions are Isaac Julien, Yang Fudong, Oskar Fischinger, The Quay Brothers, João Maria Gusmão & Pedro Paiva, Fiona Tan, Anthony McCall, Rosa Barba, Jesper Just, Melanie Bonajo, Nicolas Provost and William Kentridge. EYE also enjoys an international reputation as a centre of knowledge and expertise in the area of film restoration, research and education.