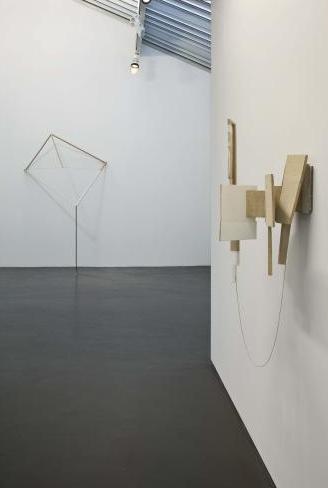 h e r e t o f o r e. This slightly archaic English indicates that we are in an “up to now.” It expresses a vision of history across space-time, or, as the poet Nicolas Pesquès puts it in his splendid text on the exhibition, “the support of yesterday for its continuous revival and, in this in-between which is today, the practice of a future that turns its back on nothing.”


The raw material of his sculpture—wood—is a living substance with a smell and a texture, capable of changing over time. The artist is familiar with every aspect of this material, having worked with wood since childhood, and seeing trees as the absolute creation for they are living sculptures inserted in Nature with an infinite diversity of forms; Trees are for him absolute creations, living sculptures infinitely diverse in their forms; this does not prevent Paul Wallach from using other materials, such as plaster, steel, cloth, paper, metal or even glass, which give a great unity to the work in the cohesion of their assembly.
These new works have a likeness in their common means of expression: rough and whitened wood, lightness despite volume, the mysterious way in which they hang naturally on the wall, held by a thread, a pin or a simple nail, resembling spatial forms filled with density varying in appearance and volume according to our own perspective. Volumes in space as much as forms filled with space, these sculptures float weightlessly thanks to their skilfully modelled architectures and geometries: they seem to be conceived from space, changing their point of perspective as they see fit in order to multiply the exploration of our sensory capacities and demonstrate how essential their exploration is for the world we are forming. By multiplying our points of view on these “sculptures that draw or drawings that sculpt, the artist enlarges the experience of our bodies. He opens up a new dimensional communication which is a daily experience for him but which goes against the grain of our ordinary habits and the conventions of our senses.” Thus these sculptures are not objects but “portions of air, voids maintained in barely discernible limits, volumes scarcely bounded, merely signified. One could almost say they are pure spaces, if such a thing could exist, models of possible space, samplings of the word volume”, according to Nicolas Pesquès.


In addition to the traced lines and their drawings in space, which become forms of sculpted space, there is also a painterly dimension to his sculpture, a painting-becoming- sculpture, as it were.
The sculptures of Paul Wallach invite us into the heart of geometry and its many spatiotemporal landscapes as well as mindscapes; their perception is ever renewed according to the time, mood and light.