The Pavilion of Reflections - Manifesta 2016 Zurigo 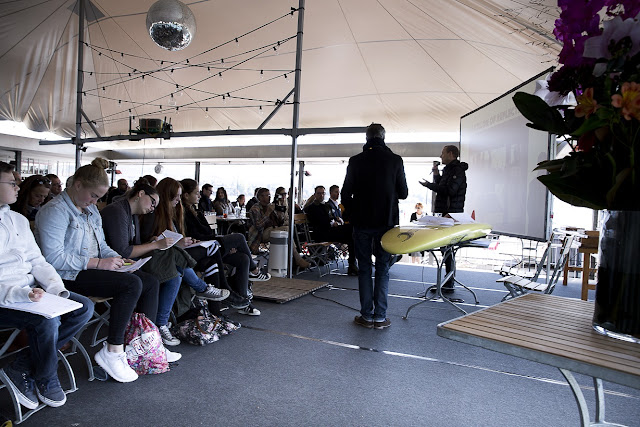 This summer 2016, Zurich will host the eleventh edition of Manifesta, one of the world’s most important biennials for contemporary art. The event’s central presentation platform will be set up on Lake Zurich, near Bellevue – the Pavillon of Reflections, a floating island with an open-air cinema and integrated swimming pool, which will constitute a new temporary landmark in the city. The aim of this architectural statement is to create a new, central location for the 100-day duration of the art biennial: the pavilion will offer space for dialogue and reflection on the artworks created for the biennial and will also act as a meeting place for participants and visitors. It is being made in co-operation with 30 architecture students from ETH Zurich, led by Studio Tom Emerson: being designed and realised in a collective process by the students themselves 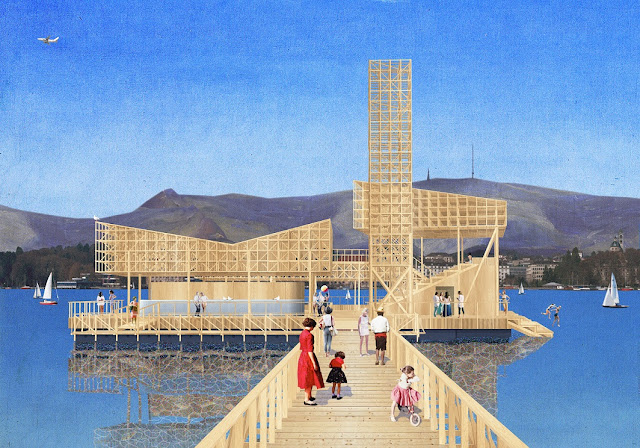 The Pavillon of Reflections as a Collaborative Effort

This blueprint is a response to Manifesta curator Christian Jankowski‘s call for the students to design a pavilion on the lake outfitted with an LED screen, spectator seats, a pool and a bar. The nature of the pavilion is determined in large measure by the collective way the students work and the co-ordination this requires. The biggest challenge is to turn the design into a real working structure. Following a competition among the students, the most promising ideas were selected and developed. Different groups worked on different scales – from the integration of the pavilion into the city of Zurich and the lake basin, to 1:1 prototypes – in order to combine the  various design, technical and organisational dimensions of the project into a multifaceted and achievable architectural plan.


“Our team represents all the relevant areas of architectural production. From the development of the concept, through detailed planning and construction of 1:1 models, to logistical organisation and documentation with our own little newspaper, in which the project is addressed from a variety of perspectives,” says Boris Gusic of the ETH Studio Tom Emerson. In addition to the design process, the production techniques will also have a profound effect on the ultimate character of the pavilion. The Pavillon of Reflections will be built solely out of wood; working with this material is an essential aspect of the design and construction process. For many of the students, the Pavillon of Reflections is their first opportunity to realise their own project, with all the possibilities and challenges that come along with it. Following the planning phase, the pavilion will be prefabricated – also by the students – in a hangar near Zurich in January 2016 and assembled on the lake in the springtime. The ETH Studio Tom Emerson has already designed and realised a number of collaborative projects with students, including several temporary pavilions and the Belvedere in the Zurich district of Zollikon. The Manifesta project continues this tradition but goes far beyond the scale of previous projects in terms of size and complexity. 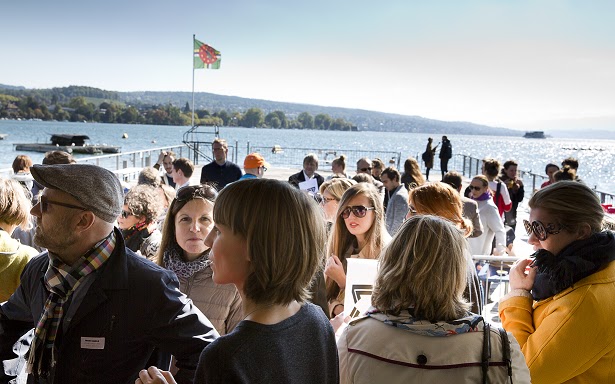 Moments of Contemplation and Reflection

“We conceived the Pavillon of Reflections as a floating, multifunction platform with a giant LED screen, a stand for spectators, a swimming pool and a bar as the central forum for the mediatisation and reflection of all the new artistic productions at Manifesta 11”, says Christian Jankowski about the project. “In the daytime, the Pavillon of Reflections will function as an urban island, a meeting place and open-air swimming area, while at night it will be a venue to reflect on the artworks presented. Films will be screened documenting the creative processes behind the new artworks as well as the exhibitions in the various ‘satellites’ - in other words - those Manifesta


exhibition venues that are not existing art museums, such as a police station, a bakery or a sewage treatment facility.” To make this possible, film teams from the Zürcher Hochschule der Künste (ZHdK), together with the artists and their hosts, will document key moments in the production phase. These contributions will be moderated by highschool students from Zurich, who will accompany Manifesta 11 as ‘art detectives’. Jankowski wanted to create a neutral venue for reception that has not already been influenced by a Zurich institution. “The location on the lake, and thus in nature, also creates a certain distance from the workplaces in the city which are the focus of the exhibition. The possibilities for recreation and leisure offered by the Pavillon of Reflections represent a clear contrast with the artworks in Manifesta, that are being developed within the workplaces of Zurich. The fact that art reception is based thoroughly in the senses will be further amplified by the fact that the site of reflection is floating on water without firm ground, exposed to the sun and rain,” Jankowski adds. “The Pavillon of Reflections is a Manifesta 2.0 experiment of which we are very proud. It ticks all the boxes. It acts as a platform for discussion and dialogue. It is a participatory and durational project. It is a spectacle and attractive for large audiences. The entire project reflects the intense and ideal collaboration between a high profile academic institution and a nomadic biennial. It will also reflect how the city can function as a stage for artistic exploration and invention”, states Hedwig Fijen, Founder of Manifesta and Director of Manifesta 11, in charge of the realisation of the next edition of the 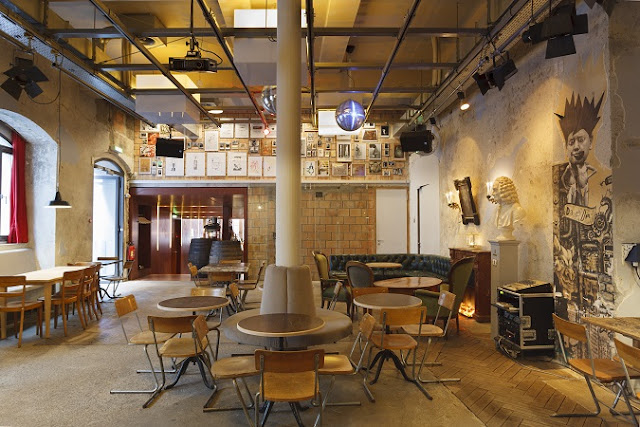 The Functions of the Pavillon of Reflections

The film screenings and the public programme will be supplemented during the day by the open-air swimming area. The spectators’ stand - on which visitors to the open-air cinema will take their seats in the evenings - also offers the opportunity for people to spend some time there in the daytime. This use constitutes the spatial structure of the design. Its multifunctionality continues in the evenings when the sun deck at the poolside serves as an extension of the space for spectators. In turn, the pool at the centre of the pavilion functions as an extension of the screen: the LED screen will bathe the platform in light, and the strikingly large screen will communicate with the city and locate the pavilion on the lake, while the bar provides the swimmers and Manifesta 11 visitors with drinks and snacks.


Zurich and its Public Swimming Areas: the Badis


Great importance is given to bathing culture Zurich. The construction of public swimming areas can be traced back to the ancient Romans. For a long time, many apartments in Zurich did not have their own bathrooms. Up to 1900, 20 public baths could be found in the city. During the subsequent boom in bathing, a visit to a public baths became a staple of daily life in Zurich. Today, Zurich has a high density of public swimming areas barely matched by any other city – based on population – with some 30 lake or river swimming areas and almost 20 other public swimming pools. Thus, the venues, known as Badis are always social places, distinctive architectural monuments within the cityscape, in which a highly differentiated, function-orientated and urban community that spans generations, collectively enjoys a moment of recreation. A platform for Zurich society to disrobe, removing status symbols in an egalitarian encounter. Following from this tradition, the Pavillon of Reflections will offer a place for both encounters and education, a place for both passing the time with physical activity and with intellectual pursuits.