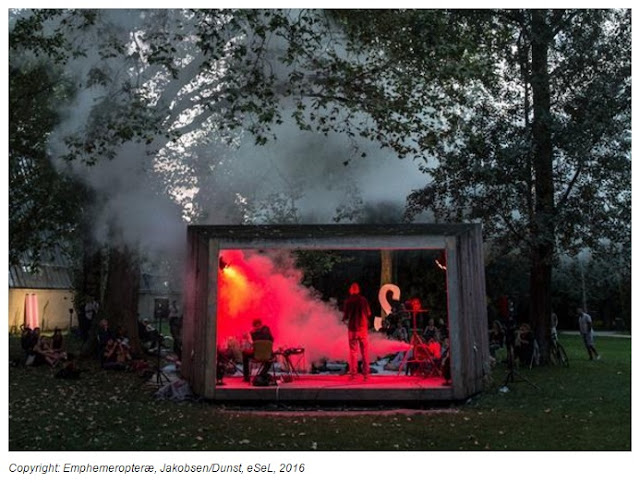 The sixth season debuts on June 2, 2017 at 7pm with performances by Jana Winderen and Em’kal Eyongakpa to coincide with the opening of TIDALECTICS at TBA21–Augarten, Vienna

EPHEMEROPTERÆ, TBA21’s annual spoken-word performance series held since 2012 in the Augarten Park brings together, artists, poets, musicians, scientists, architects, and philosophers to explore the rich traditions and evanescent articulations of poetry, literature, theory, performance, and language-based artistic practice. These unique, open-air acts complement TBA21’s exhibitions and are based on forms of “staged knowledge” or “performative rhetoric”, embodied forms of discourse and articulation, which create spaces of imagination and inspiration.EPHEMEROPTERÆ offers an arena dedicated to the nature and the experience of oral and performative practices and reveals itself as a potent and thought-provoking site of contemporary expression.

The sixth season of EPHEMEROPTERÆ accompanies the exhibition TIDALECTICS, which proposes a new mode of commitment to the oceans, a mode coming from the seas themselves, focusing on the poetic, mythical, spiritual, and solidary dimensions of the oceans. TIDALECTICSis a term coined by the celebrated poet-historian Kamau Brathwaite and the exhibition features works that have come about as a result of the TBA21–Academy and its ground-breaking research and exploration trips, as well as other works by artists whose practice is profoundly dedicated to the oceans.

Offered free of charge, the individual 40 to 60-minute live-acts are diverse in both content and form, and are repeated on a weekly basis throughout the summer from June to September (with a summer break between July 15–August 24).

Presented in the open air, under a canopy of trees, EPHEMEROPTERÆ takes place on a stage structure designed by the London-based architect David Adjaye. The stage consists of a trapezoidal prism made of timber slats, which frames the view of the surrounding park and references, poignantly, the proscenium of classic theater.

EPHEMEROPTERÆ 2017 is curated by Daniela Zyman and Boris Ondreička with Stefanie Hessler and Markus Reymann.

Please note that the program is subject to change, please confirm dates at www.tba21.org/ephemeropterae. Performances begin at 7 pm and take place on Fridays from June to September in the TBA21–Augarten.

ABOUT THYSSEN-BORNEMISZA ART CONTEMPORARY
Founded in 2002 by Francesca von Habsburg in Vienna, Thyssen-Bornemisza Art Contemporary represents the fourth generation of the Thyssen family’s commitment to the arts. TBA21’s unique collection is the result of its ongoing commitment to commissioning and disseminating multidisciplinary art projects that defy traditional categorisation, including large scale installations, sound compositions, endurance performances, and contemporary architecture. Since the foundation believes that art has the capacity to be a transformational force, it explores new modes of presentation that are intended to provoke and inspire change.